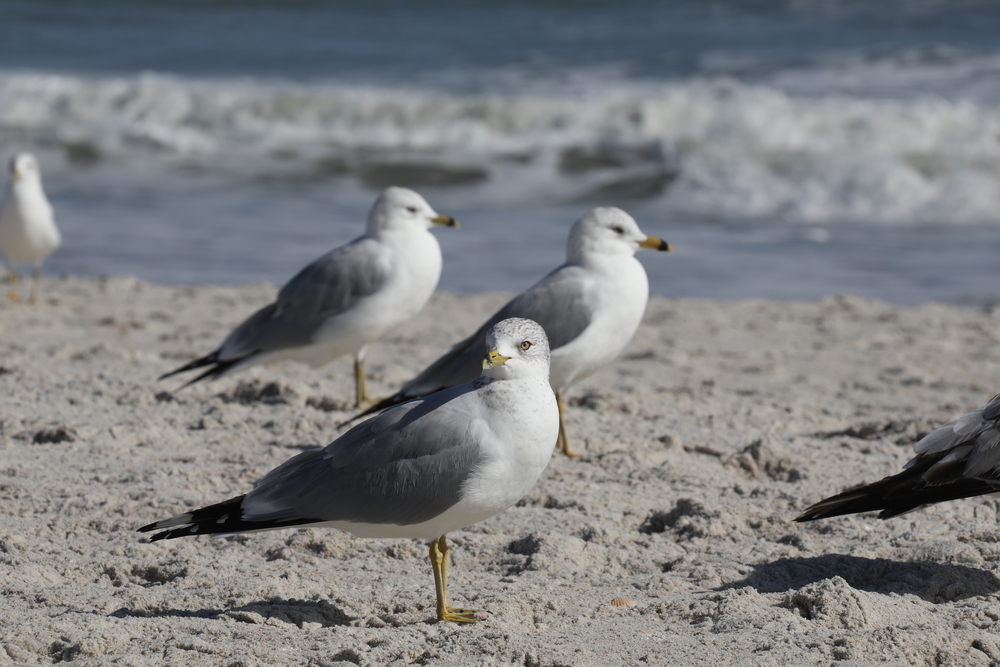 From the Atlantic Ocean traveling south to the Keys, then around to the Gulf traveling north and west across the panhandle: Florida has a massive and beautiful coastline. With all that coastline, you’re sure to find hundreds of different shore birds. So we’re going to concentrate of some of the Sunshine State’s most common and beautiful beach birds. These are the birds that fly around the lakes, dabble in the surf, dive into the ocean, hang out on seawalls and piers. You’ll see these birds in the morning and the evening since they’re most active during these times. These birds and hundreds more are really plentiful during Fall and Winter since many of the birds are migrating.

OK, lesson number one: These birds are commonly called “seagulls.” It’s a common name for any species that belong to the Laridae family. In reality, there is no species named “seagull,”…it’s just gull. And boy are there a lot of different ones. They love to fly over the ocean surf but they’re also at home in parking lots, sports stadiums and as far inland as Iowa and Kansas! The Gull species is found on every continent, including Antarctica. They’re the most prolific and widespread family of birds in the world. Gulls are at home no matter where they are.

In Florida, you’ll see Laughing Gulls (Leucophaeus atricilla), they got their name because of their call. It sounds like they’re laughing. They are simple to identify because of their black head.

A similar Gull is the Ring Billed Gull, (Larus delawarensis) again a large, light gray bird with a yellow bill with a black bar around the tip.

Most Gulls feature counter-shaded feathers that are gray or blackish above and white below. Their legs, feet, and bills can range from gray, yellow, or pink to bright red, orange, or black.

These and other birds all like to mingle around on the beach and in the air so to identify them, you’ll have to really concentrate and focus on their plumage and beaks. These acrobatic birds aren’t shy around people either. If you have ever been to the beach then you know how they like to swoop down and snatch food right out of hand, perhaps even your mouth. It’s a lot of fun to watch them and even feed them, but it’s a habit that creates a dependency on humans for food and it makes the birds aggressive.

Gulls like to feed on fish and insects-but they are scavengers too, so anything left on the ground, in the garbage can even the picnic table looks like a good meal to a Gull.

Gulls are normally monogamous and mate for life.

An interesting fact about Gulls is that they can drink both fresh water and salt water.

A flock of Gulls is called a colony or flotilla but the best name might be a “squabble” it seems like there is always a loud disagreement going on.

Brown Pelicans (Pelecanus occidentalis) are big, stocky seabirds. They have long wings that sort of bow out when gliding. They are a little comical, perhaps whimsical and feature thin necks and quite long bills with a stretchy throat pouch. It’s this throat pouch that allows them to capture fish.

You may see these birds flying over the water searching for prey, after all the Brown Pelican is a Piscivore or an animal that feeds mainly on fish. They often fly low over the waves, in single file, flapping and gliding in unison. Their feeding behavior is quite enjoyable to watch. Once they determine there is fish down below, they plunge headlong into the water in pursuit of a tasty meal.

In the 1960’s, the Brown Pelican was seriously endangered. Pesticides like DDT decimated their population. In 1972, DDT was banned in Florida and the bird made a miraculous comeback. The Brown Pelican is and national bird of Barbados, Saint Martin, Saint Kitts and Nevis, Turks and Caicos Islands and is the State Bird of Louisiana and appears on the State Seal, Coat-of-Arms and Flag.

There are 16 species of Terns in North America, The Royal Tern (Thalasseus maximus) is one of 12 Terns that can be seen in Florida.

At first glance you might think a Royal Tern is a Gull. They look a lot alike. However Royal Terns have a lighter, more buoyant flight. They have a more sleek, narrow body. Terns also have forked tails and sharp beaks. They’re white with a scruffy black top and orange beak. Terns can hover for a short time while over the water, 10 to 30 feet in the air, and then gracefully dive into the surf to catch a fish.

The largest tern is the Royal Tern. Although related to the Gull, you’ll hardly ever find a Royal Tern inland unless trying to escape a large storm. Royal Terns really like to be near the big bodies of water. There they dine on fish and crustaceans.

Sanderlings, sometimes called “peeps,” are shorebirds with black bills, black eyes and quick, little black legs. You’ll know them when you see them as they congregate near the water’s edge, poking around in the wet sand for food. They usually toddle around in groups of a dozen or fewer, scurrying on tiny legs just ahead of the surging waves. They tend to move together on the ground in flocks. They are a very common site on Florida beaches.

The Sanderling is a chubby little sandpiper that loves to eat sand crabs, insects, marine worms, small mollusks and more.

These birds breed in the High Arctic Tundra then migrate south.

Dowitchers are also strolling around on the waters edge. They’re larger than Sanderlings and a little slower. They don’t run around as much as Sanderlings either. Dowitchers are gray or light brown, depending on the season and they have a long, thin bill. You’ll see them in flocks of 100 or more at times. When humans approach, Dowitchers and most shorebirds will often run away rather than take flight.

The Short-billed Dowitcher ( Limnodromus griseus) is only short-billed when compared with the bill of the Large-billed Dowitcher. The short-billed version is a chubby, gorgeous orange, brown, and golden shorebird with a long bill. They love Florida beaches, but they like wetlands, coastal mudflats, flooded fields, even sewage ponds.

They probe for food by poking their bill straight up and down, like a sewing machine.

The Long-billed Dowitcher, (Limnodromus scolopaceus) which does have the longer of bills between the two, pokes and probes the sand exactly the same way. But it’s probably more useful to listen to Dowitchers than looking at their bills to tell them apart. The Long-billed call is “peet-peet-ter-wee-too.” The Short billed call is a softer “tu-tu-tu-tu.”

One of the larger Florida shorebirds is the Willet. The Willet is a long-billed shorebird with long legs and gray body. They like to move around in small flocks, alone or in pairs.

The clunky shorebirds like to forage by walking on shore, in shallow waters or in swamps and marshes, by probing the mud or water with its bill. When startled they respond with a loud piercing call. They’ll open their wings and run when accosted, rather than flying away.

Here are a few types of Herons that you’ll find along Florida’s coast:

The Great Blue Heron (Ardea Herodias) is a large, graceful flying, solitary bird. It’s a bluish-grayish heron, with a mostly white head and yellow bill. In fact, he’s the largest heron in North America. The Great Blue Heron has a large wingspan that can be up to 6 and a half feet across and a body length up to 54 inches long.

The Great Blue Heron feeds on fish, aquatic invertebrates and sometimes small mammals like moles and voles. You can find them stalking prey in the shallows of freshwater rivers, lakes & marshes.

Little Blue Heron (Egretta caerulea) is a small and bluish in color. The breeding birds have reddish-buff colored necks and delicate plumes on their heads. They also have a blue bill with black tip. And as you’d suspect, while still a pretty big bird, he’s a little smaller than the Great Blue Heron with a wingspan nearly 40 inches and body length of 27-30 inches. The Little Blue Heron hunts in shallow waters of inland waterways, lakes, ponds and marshes, catching fish, amphibians & crustaceans but will also troll grassy meadows for insects and amphibians.

The Snowy Egret (Egretta thula) is an elegant looking, white tropical bird, smaller than the herons but similar in body type with The Great White Heron. This gorgeous bird has stark white plumage with long black legs, almost florescent yellow feet and slight yellow features on the face with a black bill.

Snowy Egrets were almost to extinct in the late 1800’s and early 1900’s. Their breeding plumes were in much demand to decorate ladies hats. The Migratory Bird Treaty of 1918 saved them from the history books and they rebounded quickly.

A Few Other Florida Beach Birds

Here are a few addition types of Florida beach birds that you should look out for:

The Roseate Spoonbill (Platalea ajaja) is one of the most beautiful of all the shore and marsh birds you’ll see in Florida next to the Flamingo. In fact, they are confused with Flamingo’s because for their bright pink plumage. You might have to go in-search-of if you like to see one…they normally avoid places where people like to populate. The bright pink, long-legged wading bird with a spoon-shaped bill hunts in intercoastal waterways, lakes, swamps, estuaries and ponds. They use a sweeping motion, going back and forth and when a fish or bug finds itself between their powerful mandibles, the Roseate Spoonbill snaps his bill shut and the eating commences!

The Ibis (Eudocimus albus) is a medium-sized, white and red face bird with a curved, red bill. You’ll see them wading through water with their bright red legs as their curved red bill pokes and probes the muddy silt beneath the water. They find food by probing and touching beneath the water and by sight by grabbing things off the surface.

The male Ibis is very protective. They relentlessly guard their nest from other Ibises who like to steal sticks from their nests and they are fierce protectors of their mates from other males.

The Black Skimmer (Rynchops niger) is a medium-sized Tern-like seabird. The have a very stark black top portion of their body with a very white portion below. Their lower bill extends farther than upper bill which allows them to “Skim” as their name implies, with the lower mandible scooping through the water then snapping up the fish. They are very active along the beach right about when the sun starts to set.

Black Skimmers love to lounge around on beaches and sandbars, so they feature vertical pupils, narrowed to slits so they won’t be affected by the glare of the water and white sand.