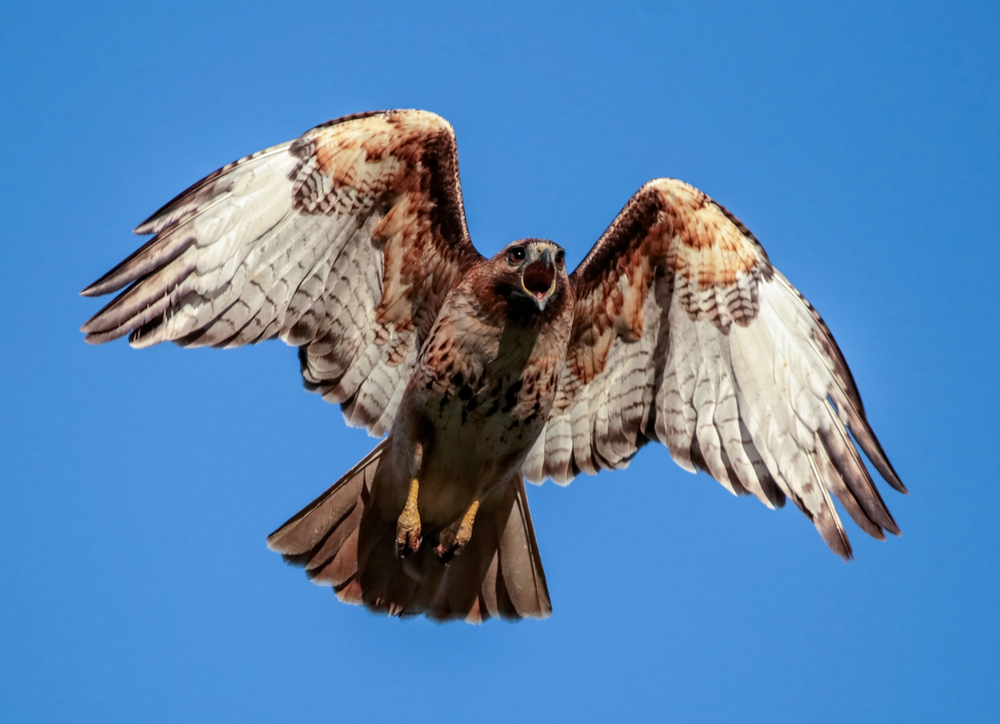 You see them perched high in the trees as you drive along the highway. You see them soaring the skies over fields and lots, you see them standing guard on poles and fence posts surveying their domain. You see them and you wonder: “How many different hawk species are there in Florida?”

Well, if you’re a bird enthusiast, you may see hundreds of hawks in Florida in a given year but there are only nine different species of hawk’s native to the Sunshine State.

You may occasionally see a hawk that took the wrong “off ramp” while migrating down to Central America, a hawk not native to Florida, but it’s these nine that rule the roost. And it doesn’t matter whether you’re a novice bird watcher or a seasoned veteran, when it comes to identifying these raptors, well, it can be kind of difficult. They all look similar to one another. Color isn’t a good indicator when trying to identify them, so when possible, we’ll give you some tips to determine exactly what hawk you’re looking at.

9 Types of Hawks in Florida

Here are 9 common types of Florida hawks that you should look out for:

This large raptor thrives everywhere. If you drive all the way down from New York to Florida it’s quite possible to see a Red Tailed Hawk in every state you pass through! They’re at home no matter where they are.

They nest in the tops of tall trees in wooded areas. In cities, they’ll nest on tops of billboards, cell towers even buildings. They like to re-use their old nests, but should they need to build another, Red Tailed Hawks can create a new nest in less than a week!

They eat vermin like rats, mice, snakes, voles and more. That’s great. However, they also eat small birds, so your feeder is not safe when a Red Tailed Hawk is present.

Their screech is coarse, haunting and very familiar. That’s because it’s been used to replace the screech of the eagle and sometimes as flying prehistoric birds in the movies. The call of the eagle is more of a chirpy squawk, not really intimidating while the screech of a Red Tailed Hawk is a little disconcerting and menacing.

Out of all the hawks, the Red Tailed Hawk might be the most easily identifiable hawk due to his red tail.

From the most easily spotted, the Red Tailed Hawk, we now look to one of the hardest to spot, the Broad Winged Hawk. It’s a small raptor with a short and stocky body that allows them to maneuver and zip through trees…perfect for forest life. They like to sit in trees, wait for prey to enter their “kill zone” then swoop down and and capture their food. Broad Winged Hawks don’t normally hunt while flying, so the ambush style of hunting fits their lifestyle quite nicely.

They’re fairly common in Florida, however you don’t often see them unless you’re walking deep into the forest on a hike or hunting.

The Broad Winged Hawk is a native, year-round resident in Florida, however many of them do migrate. In fact, their migratory event is epic! Thousands of raptors take to the sky in the Fall, swirling around and around as they start their southern journey. These large flocks are called “Kettles.” The average bird travels over four thousand miles…one way! Come Spring, they do it again, in reverse!

These guys look a lot like several other hawks, so take note that Broad Winged Hawk has a mottled brown head, with upper body glints of copper. He also has a hooked bill.

This medium sized hawk has a brownish, reddish, also known as rufous, colored head and chest and a slightly beige to white belly and under-wings. They have longer tails than most hawks. Their red shoulders are visible when they are perched on a limb or pole.

They are present year round in Florida and are mostly forest dwellers but they will hunt close to your home if you live near a wooded area.

They have a very stealthy hunting method. The Red Shouldered Hawk will “drop” onto their prey from directly overhead…a very unique style of hunting and effective.

Both the Red Shouldered Hawk and Red Tailed Hawk are believed to be harbingers of a vision. The Cherokee people believe that if you see one of these birds, whatever you’re thinking about at the time of the sighting will come true and show up in your life.

You’ll only see the Swainson’s Hawk in and around the Southeast coast of Florida. A small population winter there and along the Texas coast as well. Most Swainson’s Hawks migrate to Argentina and Chile when Fall arrives. That’s around six thousand miles one way. Sometimes it takes up to two months to make the trip. It seems this small population can’t seem to make the journey around the Gulf of Mexico so they just lounge around the Sunshine and Lone Star States.

They are elegant flyers with falcon-like wings.

Swainson’s Hawks are also known in some areas as The Grasshopper Hawk or Locust Hawk because they love to eat these insects.

The Short Tailed Hawk species breeds in the tropics. That’s probably why a small population of the birds migrate to the South…that’s South Florida, the Southern tip to be exact including the Keys.

The Short Tailed Hawk looks a lot like the Broad Winged Hawk, so to tell the difference you might need to get closer to see the clean white belly and brown above. The bird also has a rust colored patch on the side of the neck. It also has a white throat and a dark hood.

They have a hunting style that is truly incredible. They’ll just “drop” from above, surprising birds in flight, a snatch them up for a quick meal. It takes a whole lot of energy to catch their prey this way…considering there is a less than 12 percent success rate, they go hungry a little more often than other hawks. Smaller birds are their favorite prey.

They are a little shy and don’t perch out in the open…it’s rare to get a glimpse of them.

The Cooper’s Hawk is a medium sized hawk on the surface. But deep down, this gorgeous gray back, rufous-chest bird is an hugely efficient and lethal killer. They feature a fast, agile, and deadly hunting style. He can shoot through they forest canopy, zip through the bushes and around and in shrubs to catch prey. They will clear out your bird feeders quickly if hunting at your house! The Cooper’s Hawk won’t stop at the songbirds either, they’ve been known to prey on mourning doves, starlings, grackles and more.

They tend to be a secretive bird, perching under the canopy but sometimes you’ll see them perched on poles, old trees and stumps.

Adults are blue-gray to brown gray and have a notable crown of dark feathers above a like color on the back of the neck.

The Sharp Shinned hawk is the smallest hawk in Florida. They tend to patrol the forest and ambush smaller birds. They normally stay out of sight, so if you want to see them, you might have to venture into the woods a little.

They are athletic and aerobatic. They hide in the foliage, patiently wait for prey to come by then explode out of the leaves to deliver a quick and deadly blow, taking their prey by surprise.

They have orange bars on their upper chest that fades towards the belly and blue-gray back and wings. The Sharp Shinned Hawk also has short rounded wings and long tails. Females, like most hawk species, are bigger than males.

They live year round in Florida in forested areas but they won’t hesitate to venture out into neighborhoods and hunt for prey at your bird feeders. Birds as small as sparrows, up to mourning doves are hunted by these efficient predators.

They are sometimes confused with Coopers Hawks however you can tell them apart by size. Sharp Shinned Hawks are much smaller however…it’s kind of hard to see them together to make that determination.

So when determining what is a hawk and what isn’t, it’s widely accepted that the genus Accipiter includes “true hawks like those above. Some ornithologists include the genus Buteo within the Accipitrinae creating a subfamily that includes buzzards and some eagles. So although they’re not true hawks, here are two more raptors, both one-time hawks, that can be found in Florida.

Until recently, the Osprey was classified with other hawks and known as the Fish Hawk. It’s now placed in a family of its own. This slender, large hawk has long narrow wings and long legs and can be found throughout Florida. It’s not unusual to see the Osprey flying over water, then plunging feet first into the water to grab a fish with those massive talons. In fact, their diet is mostly fish. They’re the only hawk that eats almost exclusively fish in the U.S.

They’re big bird, with brown backs and wings with a stark white belly and chest. Their head is white with a brown line through the eyes and a hooked black beak.

You’ll notice when seen from below, the Osprey has a kink in their wings giving them an “M” shape when they are flying.

OK, so “falcon” is part of his name and technically he is a falcon, but for many years this raptor was simply called the Peregrine (which means “wanderer”) and a Duck Hawk.

Peregrine falcons exists across all of North America. Although they don’t breed in Florida you’ll spot them there each Fall during migration. The Peregrine Falcon travels up to 15,500 miles in a single year when flying from Alaska to South America-the longest migration of any animal on earth.

They about the size of a crow with a blue-gray back, barred white belly and chest, and a black head.

This raptor was nearly wiped out in the eastern U.S. back in the 1960’s when pesticides like DDT were used.

These mighty hunters are known for their speed, reaching over 200 miles per hour or 320 km/h making them the fastest bird in the world AND fastest member of the animal kingdom.

They’re the most common bird of prey in the world, found on every continent expect Anarctica. They don’t build nests and they have a fovea center in their retina. It’s a focual point in the eye at the black patch of both eyes which is a lot like a telephoto lense.

As we said above, you may see a hawk that is not on this list. Perhaps it’s a bird stopping over during migration or it’s a bird that just couldn’t complete the trip. But for the most part, these are the raptors you’ll see when visiting Florida.

So why do these hawks love Florida so much? Like everyone else,..it’s the climate…but more likely it’s lots of diverse habitat and lots of food! There are hundreds of species of insects, rodents, reptiles and fish that all make perfect prey for these hunters.

As we’ve stated several times, identifying hawks can be a challenge…so what did you see? Apart from the colors, it’s hard to say. So here are a few methods to use in determining what species you’ve spotted.

There are many books and websites to help you identify all birds with silhouettes, pictures from beneath, flight behavior and more.

Thank you for viewing the Hawks you’ll see in Florida and be sure to catch our other bird watching blogs.