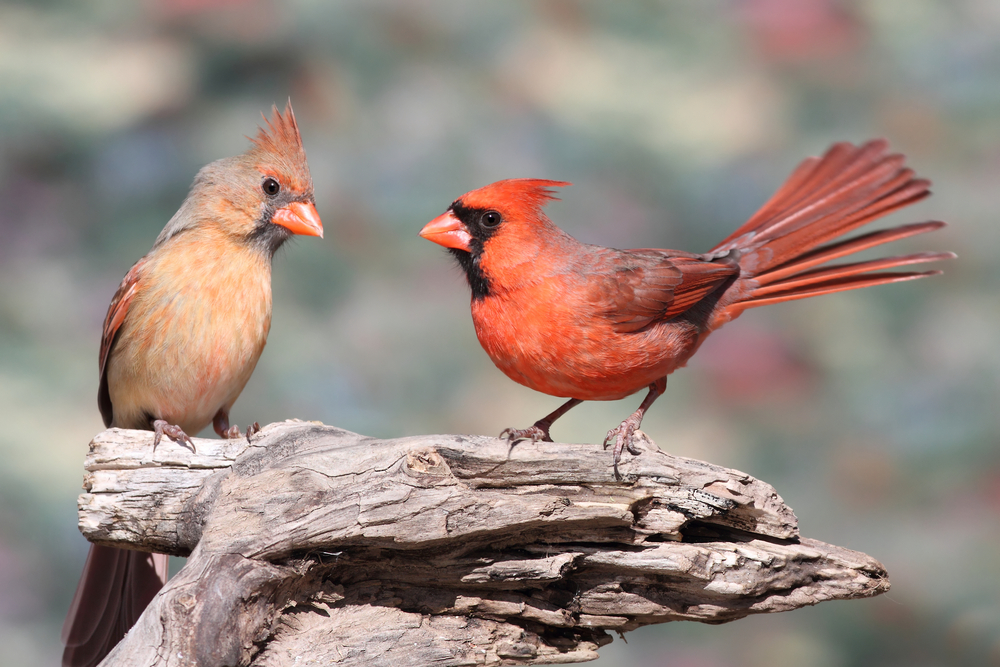 There are dedicated birdwatchers who would gladly travel across the world, climb mountains and hike through jungles just to add one more radiantly colorful species to their life lists. But even they would have to acknowledge that if you want to see one of the most beautiful and celebrated songbirds in all of nature, and you live anywhere east of the Rocky Mountains or in Southern New Mexico, you don’t have to look further than the northern cardinals in your own backyard.

If you don’t have any cardinals in your backyard, read on for some tips on how to not only attract them but also to encourage them to stay and raise a family. Since there are over 120 million flying around their North America range, they’re among the first birds to accept an invitation to hang out at your place. Cardinals have flourished with the development of suburbia. Their range continues to expand, and they don’t migrate. So with the right food, the right feeders and the right natural plants, your cardinal visitors will feel right at home, and likely will be enticed to take up residence on your property full-time for years to come.

If you observe a cardinal perched on a branch, you’ll notice that it tends to lean slightly forward with its tail positioned straight down. You’ll also notice that these birds tend to perch on the lower branches of trees.

Both of these strategies have evolved because cardinals do most of their natural feeding either on the ground or not far above.

Unfortunately, this makes them vulnerable to predation, especially from stray cats. So before we even get into the best types of feeders and food, if you want to create a cardinal-friendly habitat and you have a cat, it would be best to keep Fluffy inside the house and let her watch the birds from the windows along with you.

The perching position of cardinals makes tube feeders difficult for them to navigate. Platform or tray feeders are their favorites, either hung on a sturdy low-hanging branch or on a pole, ideally at least five feet off the ground.

There are lots of choices in this style of feeders, including fun and decorative ones that are made to look like small houses, barns and churches. But your best bet is to invest in a squirrel-proof bird feeder. These use a spring-loaded action to cut off access to the food when a squirrel lands on the perch but won’t budge from the weight of a one-and-a-half-ounce cardinal.

Set your bird feeder near trees or shrubs where cardinals will be able to retreat quickly if they sense danger.

If you have the space for more than one feeder, position them as far away from each other as possible during the birds’ breeding season in spring and summer, then create a central feeding location in fall and winter.

While mating pairs of cardinals can defend a territory as big as ten acres, the average suburban cardinal family will be satisfied with about two acres for themselves.

In winter, the birds gather into flocks and form alliances with winter migrants like dark-eyed juncos and white-throated sparrows. Moving the bird feeders together will actually help the birds to help each other in keeping an eye out for predators.

These birds do most of their feeding at dawn and dusk, and a flock of cardinals gathered together at sunset in the snow is a truly stunning sight, one that has brightened many a drab winter landscape and has inspired countless Christmas card illustrations.

Unlike some other backyard feeder birds like chickadees and titmice, cardinals will never let you get that close to them, so you’ll have to observe from a distance. You can get cardinals to visit a window feeder for a closer encounter but be sure to put some decals on the window to keep them and other birds from flying into the glass.

The Best Birdseed for Attracting Cardinals

Cardinals are uniquely pretty. The brilliant red feathers of the male are naturally the first thing that catches your eye. The female’s plumage is light brown with tinges of red in her wings, as well as her tail and in the crest she shares with the male. Besides their color, the most recognizable feature in both sexes is a black face mask surrounding a thick, bright-orange bill. Like all other members of the finch family, that bill is specially designed for cracking open the shells of seeds. While berries and insects are also important in their diets, once cardinals have found a reliable source of their favorite seeds, they’ll be back for more every day.

So what are their favorite seeds? As far as commercially available birdseed, black-oil sunflower is always the most popular choice on the menu. They will also accept the striped variety of sunflower as well as safflower seed. There are several “cardinal blends” you can buy which combine those ingredients. Their winter allies, the juncos and white-throated sparrows, prefer Nyjer seed. Unlike cardinals, those birds do their feeding almost exclusively on the ground. So a good strategy for attracting a winter flock is to toss some of your birdseed around on the ground under the feeders. The cardinals will feed from both the ground and from the feeders.

As part of the springtime mating ritual of these mostly monogamous birds, you might observe a male cardinal feeding seed to a female, which looks as though they’re exchanging a little kiss. Interestingly, female cardinals are one of the few female songbirds that sing. During the mating ritual, the females will imitate the male cardinal’s “Cheer-Cheer-Cheer!” song. When their clutch of 4 or 5 eggs hatches, generally twice a year in mid-spring and summer, the females will call to the male from the nest with a subtle “Chip!-Chip!-Chip!” that lets dad know the kids are hungry.

Having fresh water available year-round in birdbaths will also help your cardinals out and make your yard even more popular. Birdbaths can be on the ground, mounted to a deck or a porch or the traditional pedestal style. Birds love running water, and there are birdbaths which use solar power, batteries or an ac power cord to recycle the water through fountains as well as keep it heated in wintertime.

Attracting Cardinals With Flowers and Shrubs

Establishing cardinal-friendly flowers and shrubs in gardens provide the birds with both supplemental feeding sources and suitable nesting sites. Cardinals not only use flowers as a source of seed but also as a source of insects, which make up 30% of their diets. If you plant common seed-producing perennials and annuals, especially sunflower, coneflower, zinnias, coreopsis and marigolds, cardinals will find the spiders, cicadas and crickets hiding inside the plants. If you allow the flowers to naturally drop their seed on the ground at the end of the growing season and cardinals and other birds will gladly clean them up for you.

The cardinal’s red pigment actually comes from eating red berries. While they will eat a variety of berries, including dogwood, viburnum and eastern red cedar, planting red berries, especially winterberry holly but also cotoneaster, red chokeberry and currants, will subsequently make your cardinals even redder, which is especially important for a male that is trying to attract a mate.

Foraging for insects is a crucial task when cardinals are feeding their fledglings. For this purpose, they especially target caterpillars, which are packed with the protein that their growing chicks need. Growing milkweed, hollyhocks, lupines, ornamental grasses, flowering shrubs like butterfly bush and small trees like crabapples and hawthorn to attract butterflies will in turn provide the caterpillar larvae that helps cardinal parents feed their young.

For their nesting sites, cardinals look for dense hedges and shrubbery, the more impenetrable the better. They build their nests anywhere from 3 to 10 feet off the ground. The nests are built from mostly twigs and bark, but if you leave hair from your brush, shredded paper or dog or cat fur where the cardinals can get to it they will gladly use those materials to line a nest.

Hedging evergreens like arborvitae and boxwood, as well as denser deciduous shrubs like mountain laurel, forsythia and abelia, will all attract cardinals to start their families on your property. And while thickets of untamed shrubbery like wild grapes, blackberry and sumac may look untidy to you, let them go if you’ve got the space and the nesting cardinals will love you for it. Avoid trimming or cutting back hedges and shrubs during nesting season.

Cardinals hatch from speckled, green-tinted eggs after less than two weeks of incubation. Once they leave the nest, immature birds will stay in their parents’ territory for up to eight weeks, so you get to watch them as their feathers develop color and hear them as they demand food from mom and dad with a loud, desperate-sounding “Chip!-Chip!-Chip!” When they’re ready to fly off on their own, the parents will refuse to feed them anymore, and will sometimes chase them away.

The Magic of Cardinals

Cardinals are named for the color worn by the College of Cardinals that serve the Pope in the Vatican, and they are without a doubt the “high priests” of backyard birds, revered enough to be the official state bird of seven U.S. states. To Native Americans, they symbolize devotional love and monogamy. A cardinal in a totem of spirit animals represents compassion and sensitivity as well as initiative and leadership skills.

Many people believe that these birds are messengers from heaven sent to comfort those who may be grieving or depressed, leading to the old adage: “Cardinals appear when the angels are near.” There is also the folk wisdom that seeing a cardinal is a sign of future good fortune. If you make your yard a cardinal-friendly habitat, you can enjoy watching them every day. That in itself will make you feel pretty lucky.