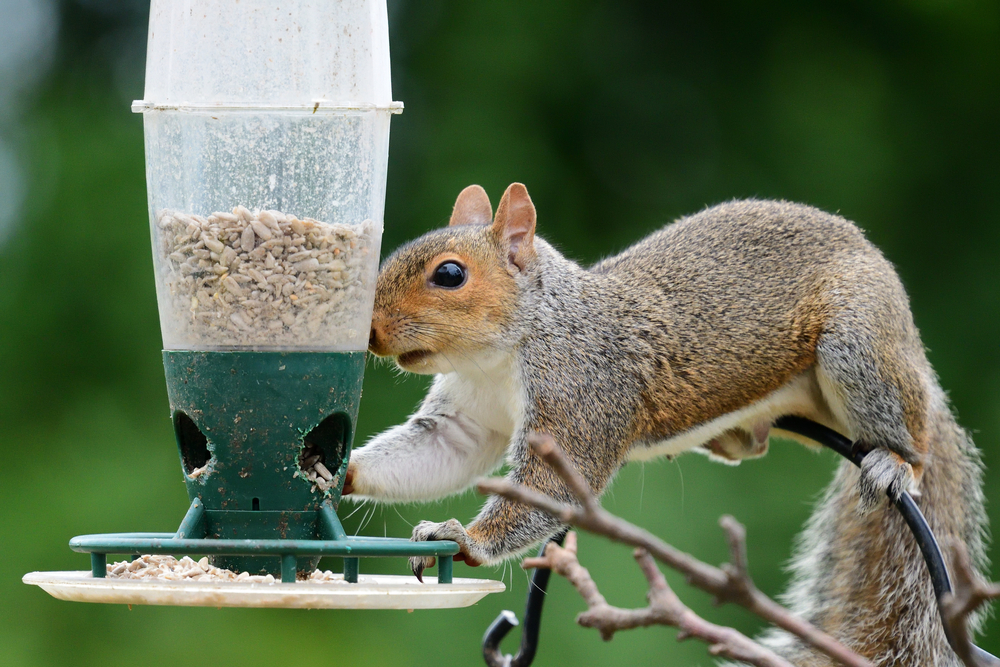 They’re cute and cuddly but they can hit your bird feeders like a whirlwind. We’re talking about squirrels, of course, and those pesky rodents can empty out your feeders fast. So, what can you do to keep them at bay? Today we are going to discuss a few methods which you may employ to keep those squirrels out of your bird feeders. We’ve compiled a long list of tactics, some of which you may have heard, but hopefully some as well that might be both new and extremely useful.

Let’s talk about how to keep squirrels out of your bird feeder!

Before We Start – Don’t Hurt the Squirrels!

First off, don’t hurt the little guys. They’re just hungry and to them that feeder just looks like what it is – a bin full of food. Even things that are considered a minor deterrent like a pellet gun can seriously hurt a squirrel and we wouldn’t want to do that. Thankfully, you’ve got a lot of alternatives to repel or otherwise baffle these crafty rodents.

Try one of the following solutions and you can make the situation a little better for everyone.

How to Keep Squirrels Out of Your Bird Feeders

Here are 12 of our favorite tips to keep squirrels away from your bird feeders:

Attach a slinky to the pole

You can create your own little climbing obstacle with the help of a classic American toy – the Slinky! To do this, put the pole inside the center of the Slinky and attach the top of the slinky to the bottom of the feeder. Stretch the slinky out a bit and the next time that a squirrel tries to climb the pole to get at the feeder they’ll get a quick, springy ride back down.

Don’t use lard, of course, as anything like this could accidentally get on bird’s feathers and hurt the bird. Instead, try using a pole made of materials that are harder to climb. Stainless steel or copper has a smooth surface and is harder to get up than a wooden pole, which just feels like a baby tree to a squirrel. You can also just go to your local hardware store and request a length of PVC pipe. The smooth plastic can often keep the squirrels from climbing but we really recommend the metal options, as squirrel claws can’t get a hold on them.

Get a Squirrel-proof pole

If you don’t feel like making your own, you can certainly purchase a pole that will do the trick in a jiffy. Squirrel-proof poles typically employ a device called a ‘baffle’, which is generally going to be a cone-shaped bit of plastic that is designed to keep the squirrel from climbing any further and reaching the feed. These are quite effective and inexpensive so if you don’t have a lot of time to make your own squirrel-proof pole then this might be a good option for you.

Squirrels can jump a long way when they are trying to get at your feeder, sometimes as much as 10 feet! To this effect, you can measure out the distance and place your feeders so that they are just out of range. Sure, it takes a little more planning, but in the long run it’s a great and sensible solution that will keep the squirrels out so that you’ve always got snacks waiting for your birds.

Lots of people have problems with squirrels eating up their bird’s dinners, enough so that there are a number of squirrel-proof feeders on the market that you can purchase, hang, and not have to worry about beyond refilling. Squirrel-proof feeders typically employ either a metal mesh or a network of small bars that help to ensure that your birds can get in and eat to their heart’s content, while the squirrels can’t really do more than swing the feeder around. These feeders do cost a little more than your standard feeder but they are quite effective and worth your consideration.

While you might happen on the occasional squirrel that will eat absolutely EVERYTHING, on the whole there are a few foods that squirrels tend not to like. Three examples include:

Capsaicin is the ingredient in hot-peppers that makes them sting and burn when we eat them. You might not know this, but it only affects mammals. There have been no reported issues with birds ingesting capsaicin and this means that we have a solution for keeping those squirrels at bay.

Spice up the birdseed!

We should tell you, this doesn’t work 100% of the time, as some report that their squirrels seems to eat the feed anyways, but others have reported great results so we’re still listing it here. Mix 1 to tablespoons of Cayenne pepper powder per 10 pound bag of birdseed and see how it goes. The birds don’t seem to mind but it might just put-off the squirrels and solve your problem.

Another tactic which may employ to keep the squirrels out of your bird feeders is a very amusing option indeed. Known as a ‘squirrel go round’ or a ‘squirrel-a-whirl’, the design is essentially the same. A number of arms are suspended around a pivot-point, to which you may attach corn or other food options that will tempt the squirrels enough to go after it. Due to the pivot, this causes the arms to spin, which whirls the squirrels around in amusing circles.

This doesn’t harm them and they might even enjoy the ride, as the same squirrel can often be seen making multiple attempts to get at the lure-feed, so if you’d like an option that is potentially entertaining for everyone then this is one to consider.

One simple strategy which you may employ with some old, plastic bottles is the following. First, make a nice, round hole in the bottom of the plastic bottles with an X-Acto or a utility knife. Next, string a line, to which you will hang your bird feeders, and thread the last portion of the line on both sides through the bottles.

Squirrels are little acrobats and quite adept at ‘tightrope walking’, but his little trick will keep them from doing his, as the bottles will rotate as soon as the squirrels step up on them. One note, however… Squirrels can jump about 5 feet in the air from ground-level, so place your line so that your feeders will be at least 6 feet from the ground!

Keep the ground underneath feeders clean

Always keep the ground underneath your feeders clean. Bits that fall down can attract squirrels in the first place, or other animals that are even tricker, such as raccoons! Try to clean the area underneath daily as a preventative measure so that the squirrels don’t figure out that there is a big box of hanging food in the first place. If you don’t, those feeders will eventually be noticed and you’ll wish that you had kept the ground clean.

While we haven’t tried this one, we’ve heard it mentioned so much in birding circles that we wanted to include it. We’ve been told that you can take a bar of Irish Spring soap, put it in a sock, and hang it in place near feeders in order to keep the squirrels at bay. Supposedly they do NOT like the scent of it. They are also said not to like the scent of peppermint oils but if you use any oil deterrents just make sure that they are hung separately and not anywhere that the bird can get oil on them.

If you can’t beat ‘em, feed ‘em! If nothing that you have tried is keeping those little rascals out of your feeders then there is no shame in setting up a separate feeder. Make sure that you are using different foods so that the squirrels feel that ‘their’ feeder has the best food and make sure that you put a little something in it daily. With any luck, the squirrels will leave your bird feeders alone and stick to eating from the ‘squirrel feeder’. Yes, it’s not ideal, but sometimes compromise is the only option and at least this way you know that your birds will always have the meals waiting that you’ve put out for them.

Well, there you have it! The techniques which we have listed are all quite popular and time-tested to work with MOST squirrels. Yes, on occasion you’ll get a really clever one, but for the most part these techniques should give you an edge when it comes to keeping those rodents at bay.

Just give them a try and be patient and before you know it, your bird food will go back to being what it is meant to be – for the birds!