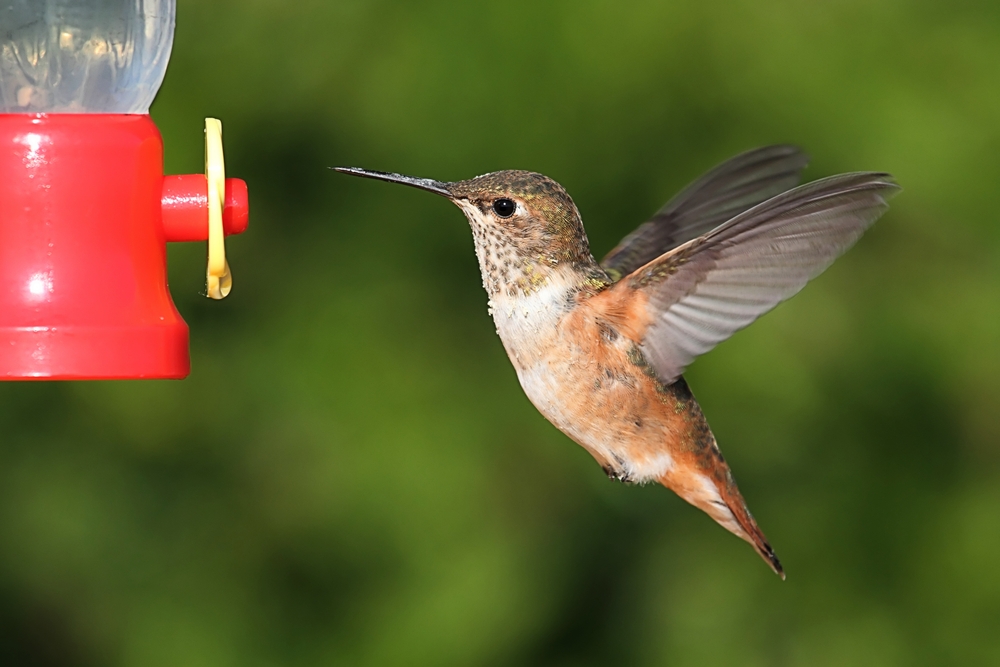 The ‘Prairie State’ of Illinois has a diverse ecosystem, and two-thirds of the state used to be covered in grassland. Much of that has since been converted for agricultural use, but that doesn’t mean the state is lacking in flora and fauna.

Today, we’re going to talk about hummingbirds in Illinois. If you’ve ever seen one flying around, you’ve likely wanted to know what it was and which types are present in the state.

While none of the Illinois hummingbirds are permanently resident, there are several types to look out for. We’ll explore these different types of hummingbirds, how to identify them, where to spot them, and offer up a few interesting facts along the way. Let’s get started!

Types of Hummingbirds in Illinois

Hummingbirds typically fall into a few categories that depend on the amount of time they spend in various geographic locations. A hummingbird can be a resident species, a seasonal species, or an accidental species in a region.

While there are no permanently resident hummingbirds in Illinois, you can encounter seasonal species and even a few accidental arrivals.

These can be identified by looking at distinguishing markings and size. You can also try to attract a specific type of hummingbird by providing a particular food source. Among the species of hummingbirds known to appear in Illinois, include:

Coloration and Markings: All birds of this species have a brown body, a short black bill, and some white markings. The male has an auburn throat, while the female has a speckled throat and a green back.

While this species of hummingbird continues to be very common, its population has suffered in recent years due to habitat loss. Rufous Hummingbirds breed very far north compared to other species. These birds make nests in deciduous trees and shrubs that are around 15 feet off the ground. Grass, webs, moss, and lichens make up the nest.

It spends most of its time in the gulf area and the West Coast, but is visible across the country at various points of the year.

The Rufous Hummingbird is known to be fierce. They often chase competitors away from their feeding grounds even if those competitors are bigger than them.

Coloration and Markings: All members of the species are bright green except for their white stomachs. Living up their name, males have an iridescent red throat while females have a brown crown and sides.

Ruby-throated Hummingbirds are known for being one of the most extensive hummingbird travelers. They are present in Illinois between mid-spring and early autumn. This appearance is often part of a journey from Central America to Canada. These hummingbirds are the only ones who favor the eastern half of the United States over the western half.

This bird is another species of hummingbird in Illinois that displays some aggression when defending food sources. They often hover when eating from flowers, but may perch when at a feeder. They have very short legs, so they do not walk often.

You can recognize this species by its mating behaviors. The male flies in a wide arc in front of the female while making short buzzes for brief periods.

Coloration and Markings: All members of the species have copper-colored backs and a straight bill. Male Allen’s Hummingbirds are recognizable by their iridescent throats and orange eye, tail, and stomach markings. Females do not have iridescent neck plumage.

Habitat: This species migrates from Mexico to Oregon. They are most visible along the Pacific coast from early spring to early summer. Allen’s Hummingbirds enjoy the canyon and mountainous habitats.

While they spend most of their time along the Pacific Coast, Allen’s Hummingbird is an accidental visitor to Illinois. While this bird enjoys brushy canyons and mountains, it has somewhat adapted to suburban areas. In Illinois, this bird is present less every year as habitats change.

This hummingbird hovers as it drinks nectar from flowers. It also hovers when eating from a feeder, though it may just perch. The bird grabs insects in a variety of ways, including taking them straight out of a spider web.

Coloration and Markings: Most are predominantly green. The males have an iridescent pink throat, while females have a gray throat and a sprinkling of red spots.

Anna’s Hummingbird is known for its frequent song and is one of the most talkative hummingbirds out there. You may also be able to recognize it based on how it keeps its tail still as it hovers.

While other hummingbirds migrate, Anna’s Hummingbird is a permanent resident of the West Coast of North America. Over the decades, this bird has slowly added populations throughout the country. It is a highly adaptable bird, enjoying wild areas and suburbs alike.

The males of this species are known for their impressive mating displays. The male begins with a song before flying about 100 feet into the air and then diving down towards the female. When he arrives at the base of his dive he makes a loud sound with his tail.

Coloration and Markings: They are bright green with red beaks. Males have a large blue throat, and females have a pale stomach.

Broad-billed Hummingbirds are rarely present in Illinois. It spends most of its time in Southern Arizona and California since this is its favored breeding range. Some members of the species are known to migrate in a limited range beyond their preferred habitat.

Although these birds are not particularly aggressive, they will defend their territory when needed. This defense is done by perching high so that they can see intruders.

Coloration and Markings: These birds have a subtle green color with a white stomach and a black bill. Males have a black throat with a small amount of iridescent purple, while females have a pale throat.

Black-chinned Hummingbirds are an unusual sight in Illinois. They generally prefer areas at a low elevation with plenty of warmth, though they do well in several habitats. While they migrate through a large section of the western United States, they do not usually spend long periods there. In the winter, these birds spend time in Mexico.

This species’ mating ritual closely echoes that of the Ruby-throated Hummingbird. The male makes a similar wide arc in front of the female while making tittering sounds.

These hummingbirds prefer to perch up very high so that they can see any intruders. They nest in a lower part of their habitat. While these often exist at about four to eight feet off the ground, they can sometimes make their nests higher or lower than that.

Coloration and Markings: These birds are green all over except for a bright blue cheek and chest patch.

This hummingbird is a very occasional visitor to Illinois. It spends most of its time in South and Central America, but can wander as far as Canada. The Mexican Violetear enjoys living in a canopy in the subtropical zone. This bird gravitates towards areas with a lot of humidity and a high altitude. However, they can also do well in areas affected by deforestation.

Mating displays with this species are similar to many other hummingbirds. The male bird flies in an arc shape in front of the female. These birds often nest in areas low to the ground compared to other hummingbirds. Males are very defensive of their territory.

Since hummingbirds are so tiny and fast, they can be tricky to spot and even tougher to identify. However, when you know what to look for, you can identify Illinois hummingbirds based on their coloring and behavior. Use the knowledge in this article to identify any hummingbird you see in Illinois. If you happen to spot any that do not fit these descriptions, make a note, because you may be making history.