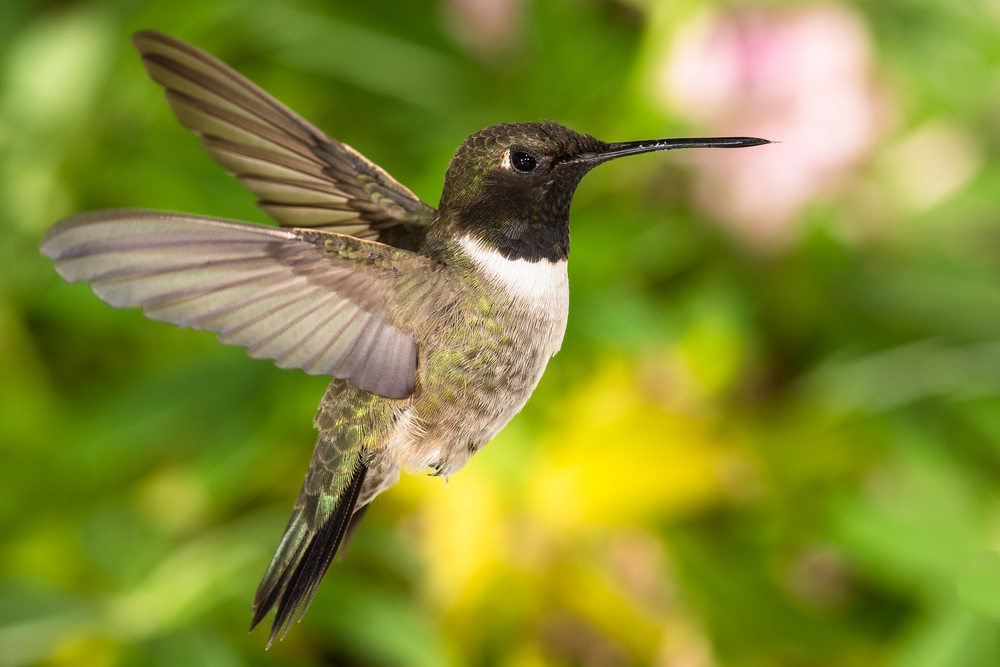 The “Buckeye State” of Ohio is known for rolling plains, rich agricultural history, and broad, open valleys. Although Ohio can’t claim any hummingbird species as a permanent resident, two seasonal species are easy to spot. Five accidental species make rare appearances in Ohio. Today we’ll be exploring all seven of these species and hints on where to spot hummingbirds in Ohio.

Types of Hummingbirds in Ohio

Let’s talk about the types of hummingbirds that you might encounter in Ohio. Scroll down more to read more details on each species, such as coloration, size, habitat, and tips to find them!

Coloration and Markings: Both male and female Ruby-throated Hummingbirds have a brilliant, emerald green coat with a white belly. The same green that cloaks their back is found on the crown of their head as well. Males have that iconic, ruby red throat that gives them their name. In good lighting, both the green and red feathers appear iridescent.

Size: Males and females are approximately the same size. They are 7-9 centimeters long and weigh 2-6 grams. Their wingspan measures 8-11 centimeters.

Habitat: In Ohio, you can find the Ruby-throated Hummingbird in backyards enjoying nectar feeders, among flowering gardens, or in wild fields. These hummingbirds prefer open areas such as parks and meadows.

Diet: These hummingbirds enjoy nectar from feeders or from flowers. If you watch them closely, you might even spot them snatching small insects out of the air or stealing them from spider webs.

More About the Ruby-throated Hummingbird

Did you know the Ruby-throated Hummingbird is the only hummingbird to breed in the Eastern U.S.? During the winter, they migrate to Central America. They arrive back in the Northern U.S states such as Ohio around late spring. Typically, they stay in the area until late August or September when they begin to fly south again. If you have a feeder in your backyard, you may have noticed that these hummingbirds can get quite aggressive over food sources. Females create small nests and lay 1-3 eggs.

Coloration and Markings: It is very easy to distinguish between male and female Rufous Hummingbirds. Males have a brilliant coat of fiery orange, with a small white patch under their throat. You may also spot traces of green on their iridescent feathers. Females, on the other hand, have duller coats that are light and dark brown, rust-colored, and white. Females often have a faint patch of orange on their throats. If you look closely, you may be able to glimpse a pattern of brown spots on the female’s head.

Habitat: Rufous Hummingbird’s can often be found in parks, clearings, meadows, and backyards. In addition to spotting them in Ohio, these birds are known to thrive in high elevation environments as well, up to 12,600 feet above sea level!

Diet: In addition to nectar from blooming flowers and feeders, Rufous Hummingbirds enjoy eating an array of insects. They are known to snack on small insects such as gnats and flies.

More About the Rufous Hummingbird

Coloration and Markings: Male and female Mexican Violetear Hummingbirds have the same coloring. Look for a brilliant coat of iridescent green with a purple stomach and or throat. Watch for the iconic violet marking around the eyes and side of the head. The coloring on the tips of the wings ranges from a mousy brown to almost black. The bill of their beak is ever so slightly pointed downward.

Size: One of the larger species, the Mexican Violetear ranges from 9.7 to 12 centimeters in size. A typical wingspan length is 12 centimeters.

Habitat: As their name suggests, this bird is frequently spotted in Mexico and central American countries. These hummingbirds prefer a subtropical environment, favoring humid weather and higher elevations.

Diet: Like most hummingbirds, the Mexican Violetear lives on nectar and small insects. These hummingbirds love to feed on brightly colored flowers in the subtropical zone with a high sugar content.

More About the Mexican Violetear Hummingbird

As the name suggests, these birds are typical year-round residents of Mexico and neighboring Central American countries. However, this hummingbird is known to venture north enough into the United States and even southern Canada. Spotting one in Ohio would be rare but not unheard of. While they are a rare sight to see in Ohio, their population is stable. These hummingbirds have adapted to deforestation and thrive in urban and suburban environments.

Coloration and Markings: You may find it hard to believe that the male and female Black-chinned Hummingbirds are of the same species. The males have a black head with a brilliant, purple collar. Their body is a subtle mix of grays, whites, light browns, and some faint greens. The females wear a cloak of golden-green with brown-tipped wings and a gray-ish white front.

Size: These hummingbirds are about 9 centimeters in size and weigh about 2-5 grams. Their wingspan is typically 11 centimeters.

Habitat: The Black-chinned Hummingbird is very adaptable. This bird has been spotted regularly on the west coast of the U.S., where it lives in deserts, mountains, and urban areas.

Diet: These hummingbirds are no strangers to a backyard feeder. They love feasting on nectar and small insects such as gnats and spiders.

More About the Black-chinned Hummingbird

This hummingbird is the most recent addition to hummingbirds spotted in Ohio. In fact, the first reported sighting was in 2020. This species of hummingbird typically sticks to Western U.S. states and Mexico, but they can be deemed “accidental” visitors in other regions as well.

Size: The Calliope Hummingbird is the smallest bird native to the U.S. and Canada! They measure in at only 8 centimeters and weigh only 2.4-3.4 grams. Their wingspan is 10.5 to 11 centimeters.

Habitat: You can most commonly find this species of hummingbird in the pacific northwest, west coast, or mountain west range in the United States and Canada. Typically, the Calliope Hummingbird winters in southwest Mexico.

More About the Calliope Hummingbird

This species was named after Homer’s muse, Calliope. Calliope is said to have inspired the Illiad and the Oddesy. These small birds are very rarely seen in Ohio, with the last sighting happening in 2017. Possessed with the spunk most hummingbirds are known for, the Calliope Hummingbird has been seen even chasing off birds as large and powerful as Red-Tailed Hawks.

Coloration and Markings: These orange hummingbirds are a sight to see! The males have striking orange and rust color feathers and sport iridescent colors of brown, orange, yellow and red on the throat. Females have a somewhat subdued version of this, with a rust colored body and patches of a light, mossy green mixed in.

Size: These medium-sized hummingbirds are 9 centimeters and weigh 2-4 grams. Their wingspan is 11 inches.

Diet: Like other hummingbirds, Allen’s Hummingbirds stick to a diet of nectar and small insects.

More About the Allen’s Hummingbird

The Allen’s Hummingbird often gets confused as a Rufous Hummingbird, due to their similar coloring. However, the difference lies within the shape of the tail feathers. The Rufous Hummingbird’s tailfeathers have a distinctive notched tip. Considered an accidental visitor to Ohio, spottings have happened, although not within the past decade.

Coloration and Markings: The male sports a magenta head with a greenish-gray body. The female has golden-green markings on her sides and along the crown. Their beaks are straight and without curve.

Size: The Anna’s Hummingbird is 10 centimeters in length and weighs 3-6 grams. The wingspan measures 12 centimeters.

Habitat: The Anna’s Hummingbird thrives in a variety of habitats, usually along the western part of the United States. You can find this species in the scrub, open woodland, urban areas, and lowland meadows.

Diet: Anna’s Hummingbird feeds on more insect types than any other hummingbird found in the U.S. These insects include midges and leafhoppers. In addition to insects, this species dines on nectar and sap from trees.

This species is another accidental visitor to Ohio, so don’t expect to see one at your feeder. This incredibly vocal species is known for putting on quite the show to woo potential mates. Males fly over 100 feet into the air before diving down with a burst of feathers and noise. Anna’s Hummingbird is an important part of the ecosystem, specifically in California, where the birds act as necessary pollinators.

We hope you’ve enjoyed this guide on the different types of hummingbirds that have been spotted in Ohio. Clean and fill your feeders regularly! You never know what you might be lucky enough to see. Until next time, happy birding!