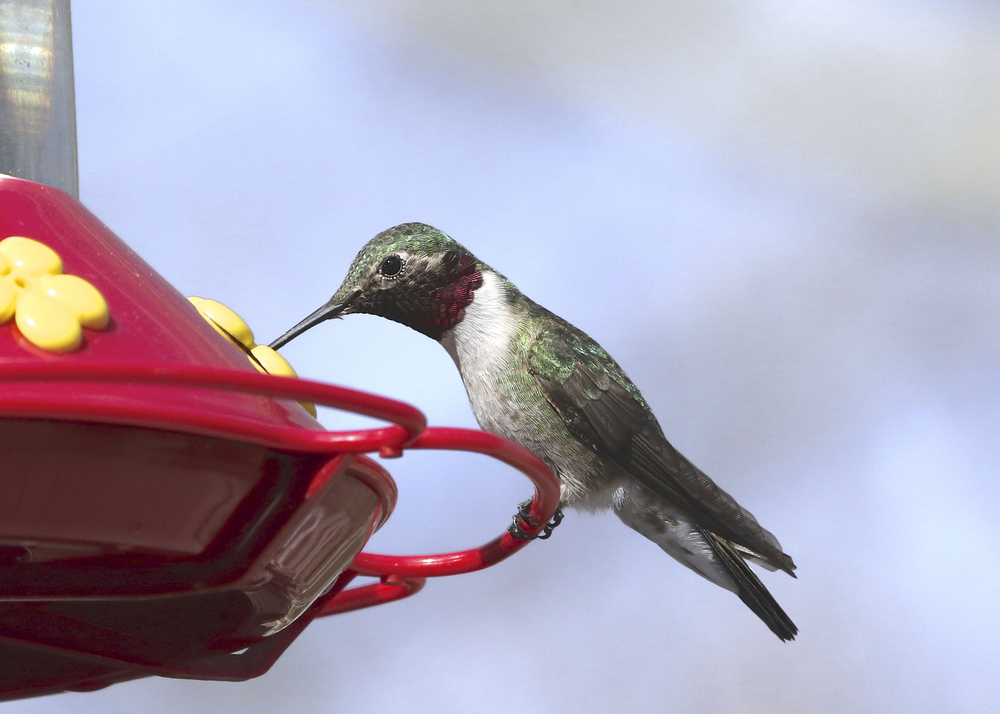 Did you know Oregon is one of the most popular bird-watching states? Over 500 bird species can be seen in the state, making it the sixth-highest state to record resident and migratory bird species in the United States. Oregon Hummingbird species are one of the more flashy but unique birds you can see.

Hummingbirds, commonly known as garden jewels, play an essential role in backyards and gardens. They make the best garden pollinators visiting up to 2000 flowers a day, are insect predators, and are just plain fun to watch.

Keep reading to learn more about the Hummingbird species and how to spot these Hummingbirds in Oregon.

Types of Hummingbirds in Oregon

Most hummingbirds are migratory birds, traveling from Mexico and other southern states in the winter to areas of the Pacific coast, including California, Arizona, and Oregon. While there are roughly 340 species globally, only seven hummingbird species live in or migrate through Oregon.

There are typically three categories of hummingbirds in Oregon.

Oregon hummingbirds are commonly seen in backyards, gardens, and at Hummingbird feeders. Still, they prefer other areas like the rocky coast, lush green forest, and the high desert for breeding, making Oregon a Hummingbird paradise.

The Black-chinned Hummingbird is a seasonal Hummingbird in Oregon that begins migrating to the state as early as March and is commonly seen between May and October. It is the most adaptable species preferring lush river bottoms, urban settings, and the desert canyons of east Oregon for its breeding habitat.

The males have a dull, metallic green back, grayish-white belly, and a black throat (or gorget) with an iridescent purple band that can also look black in low light.

Unlike any other North American Hummingbird, the wingtips of the Black-chinned Hummingbird are broad and curved. Females are typically not as flashy, with only a pale throat and white tips on the tail feathers.

Black-chinned Hummingbirds can be seen eating nectar, small insects, and spiders consuming up to half their body weight daily to fuel the high-flying lifestyle.

Anna’s Hummingbird is the most common hummingbird species in Oregon. It is a resident of the region, which means it does not migrate and can be seen in the state all year round. It is also the only Oregon hummingbird regularly seen during the winter, preferring to make its habitat in west Oregon backyards and parks.

Weighing about the same size as a nickel, Anna’s Hummingbird usually has about 2-3 broods a year, a result of a unique mating ritual in which males will climb up to 130 feet before diving down to the ground traveling up to 60 MPH and making a loud noise from their tail feathers.

Another seasonal hummingbird species in Oregon, the Calliope Hummingbird, is the smallest breeding bird in North America and the smallest migrant globally. Yet, despite its small size, it breeds in mountain habitats between March and October and successfully survives in Oregon’s high elevation and cold winter months.

Calliope Hummingbirds have an average weight of 0.9 oz (a little more than the weight of a penny) and are about the size of a ping pong ball. Males have a bright magenta gorget with glossy greenbacks and a dark tail. The females lack the iridescent magenta throat and have a more pinkish-white underneath.

To attract females, the males will fly up to about 100 feet, make a u-turn, and fly back down, almost hitting the ground before flying upward again. They will build their nest in evergreen trees and lay 2-3 eggs at a time.

The Allen’s Hummingbird is not as common in Oregon but is often seen seasonally, primarily in the southwest corner between March and August. This hummingbird species is unique in that it prefers to breed along the coastal regions from California to southern Oregon.

Allen’s Hummingbirds look similar to the Rufous Hummingbirds, a more common Oregon hummingbird. The main differences between the two species are plumage, behavior, and vocalization. Males have reddish-orange throats and orange bellies and tails. In addition, they have long straight bills and a coppery greenback, while the females lack much of the throat coloring.

The Rufous Hummingbird is the most common hummingbird species located in Oregon. It starts arriving in late February, and most leave by October. Though small and compact, they have the longest migration of any bird in the world, traveling more than 4,000 miles each way.

Commonly seen throughout western Oregon in backyards and gardens, the male Rufous Hummingbird is bright orange on the back and belly. They have an iridescent rusty red throat with a white patch slightly below the throat. The females are greenish-brown on the back, have a slight rusty red color on the sides, and have a whitish underside.

This hummingbird species is the most aggressive of all Oregon hummingbirds and is highly territorial. They are known to chase off other birds during migration, breeding, and when feeding on nectar.

Although rare, Costa’s Hummingbirds can be seen in western Oregon during the spring and summer, mainly in the Winchuck, South Beach, and Medford areas. They are predominantly residents of Baja, California, southern California, and areas of southwestern Arizona, preferring a desert habitat.

Males have iridescent purple throat patches that flare out and a purple head. Their backs are green, and their bellies are white with green coloring. Females lack the purple color and are white underneath, and can be easily mistaken for other native Hummingbirds.

The nests are built low to the ground in shrubs and often have only two broods a year.

Broad-tailed Hummingbirds are rare and are known as accidental species in Oregon. They are often found on the southwest side of the state during the summer (May-August), with many being seen at 5,000 to 10,000 feet elevation. Due to the cold nights, they can slow their heart rate and drop their body temperatures to conserve energy and heat.

They prefer remote habitats, often building nests in the rocky mountain areas. Males have a rose-red gorget and green plumage with no distinct coloration on the throat like the more common Rufous Hummingbird. Females are almost indistinguishable from the other birds, as well.

Attracting Oregon hummingbirds in your garden can be easy, environmentally beneficial, and fun to watch. Of the 340 hummingbird species, only seven are residents of Oregon – 5 are seasonal, 1 is a permanent resident, and another is quite rare.

The most common way to attract hummingbirds in Oregon is by putting out nectar feeders and planting colorful flowers with long tubular blooms. They are especially attracted to the color red.

Oregon hummingbirds are unique because they have the largest brain, heart, and energy output in proportion to their body weight. Unlike other bird species, they can hover and fly backward because their wings rotate at the shoulder. In addition, during the breeding season, males will perform a spectacular dance of sorts reaching speeds of 60 MPH and having up to 200 wingbeats per second.

Because Hhummingbirds are tiny and fast, they are sometimes hard to distinguish. So, when trying to identify hummingbirds in Oregon, be sure to look for characteristics like color pattern, size, shape, behavior, and habitat.