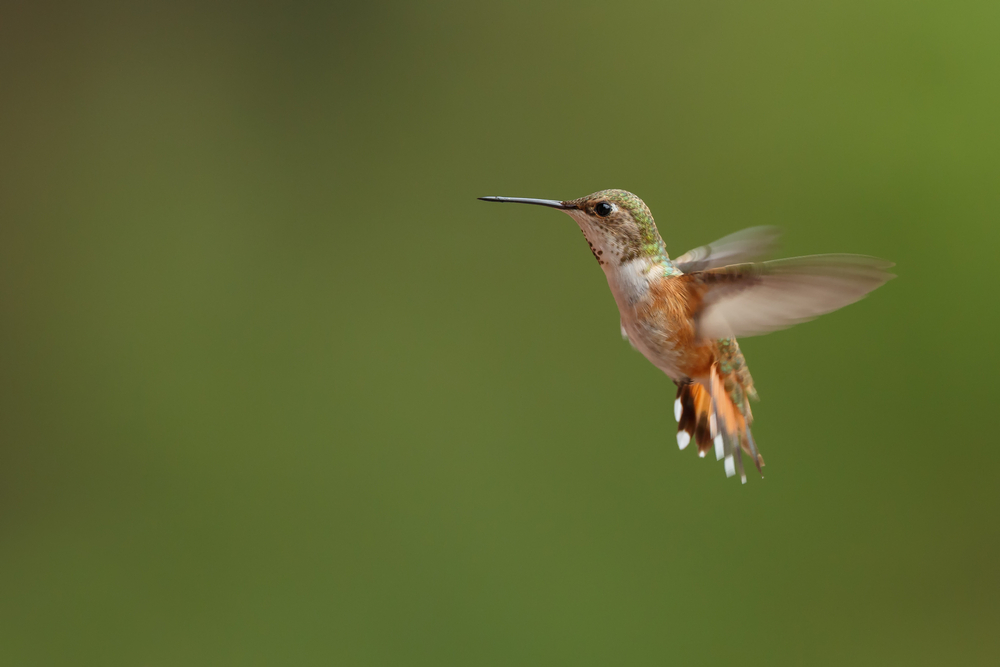 Virginia is well known for being the “birthplace of a nation” because it was the first place that English people permanently settled. While Virginia is famous for its tunnels, cemeteries, and trails, it also has some beautiful wildlife as well. This includes many different species of hummingbirds that you can spot during different times of the year.

The hummingbirds you will find in Virginia include:

Coloration and Markings: Males have a bright red throat hence their name while the females in this species have a dull white throat. You can spot this bird a mile away with its bright red neck and both male and female have emerald green on its crown and back. This hummingbird has greyish-white underparts and its throat can either be bright or dark red depending on the angle and lighting.

Habitat: Ruby-throated hummingbirds can mostly be found in backyards, gardens, meadows, forest edges, grasslands, parks, and open woodlands. They like to be in locations with lots of flowers.

Diet: These hummingbirds eat spiders, aphids, flies, and gnats. Although they are also known as nectar feeders, they feed on insects to get a good source of protein.

More about the Ruby-throated hummingbird

Did you know this bird flaps its wings around 53 times per second? How cool is that! When they flap their wings this many times, you will hear a humming sound. They are also unable to walk around like most birds because their feet are so short it makes them off-balanced while walking.

When these hummingbirds are calling, they sound like squeaky mice and they only weigh about 7 grams. Ruby-throat hummingbirds take 6-10 days to carefully build their nest and they spend the summer in Eastern parts of the U.S. and then migrate to Central America in the colder months.

Diet: These birds eat about every 10-15 minutes per day and travel to about 1,000 flowers per day. Although they mostly feed on nectar from flowers they also eat insects such as ants, beetles, wasps, and flies. The Allen’s hummingbirds consume over twice their weight in nectar every day. This is because they use tons of energy to fly around and gather nectar.

During the summer, these birds can be found along the coast of the U.S. from Oregon all the way to Southern California. During the cold months, they migrate to Mexico. They are related to the Rufous hummingbird and have really long tongues which allow them to feed on nectars easily.

These birds tend to spend most of their time alone and if any unknown birds come around they quickly become aggressive. Mating between these birds only lasts between 3-5 seconds.

Coloration and Markings: Females are dark metallic green with a white throat and white underparts. Females also have white tips on their outer tail feathers. Males are nearly the complete opposite as they tend to be all black aside from an iridescent purple throat and greyish-white underparts.

Habitat: Mostly found on dead tree branches in all trees or on feeders. They can also be found on vines, flowering shrubs, in mountainous forests, and lowland deserts.

Diet: Mostly feed on nectar but also feed on tiny insects. They tend to feed on flowers while hovering over them and extending their long beak into the middle of the flower. They also like sugar-water mixtures from hummingbird feeders and will take insects that have been caught in spider webs.

More about the Black-chinned hummingbird

A group of these birds has different names including shimmer, glittering, and a bouquet. They can fly around 30 miles per hour but if they are diving they can reach up to 60 miles per hour.

The oldest black-chinned hummingbird lived up to 10 years old. During the breeding season, these birds can become very defensive and males tend to mate with more than one female.

Coloration and Markings: These birds have a very unique look making them easy to spot from far away. They truly have the colors of spring and summer with males having a bright pink head and throat. The rest of their body is mostly bright green and gray. Females can be found with reddish spots by their throat and metallic green spots above and grayish below their throat.

Diet: They feed on tiny insects and enjoy the sugar-water mixtures in hummingbird feeders. But they mostly feed off nectar from flowers.

Along the Pacific Coast, they are one of the most common types of hummingbirds. Similar to the ruby-throated hummingbird, these birds can beat their wings about 40-50 times per second. Their nest is pretty small, just a little bit bigger than a walnut. When they are diving, they can fly 40 mph but in normal flight, just 25 mph.

Each day, they only consume about half their body weight in nectar. They make a series of short, sharp chirps that can be described as twittering sounds. They have a unique song that lasts at about 10 seconds or even longer than that.

Coloration and Markings: Adult males can be found with a greenish vest and magenta rays pointing downwards. They tend to have a hunched posture and females have a bronze-green back and a peach color across their underparts.

Habitat: The Calliope Hummingbird spends cold winters in scrubby edges in Mexico and in pine-oak forests. They also spend time in forests that are regenerating after logging or a forest fire and they breed in mountain meadows.

Diet: They feed off of nectar from flowering plants and catch small insects including spiders as they fly through the air.

Known as the smallest bird native to Canada and the United States. Although sometimes, they can be spotted in New Haven Connecticut. Male birds perform U-shaped dives as a way of attracting females towards them. They can be found perching on higher willow branches when they are defending their breeding territory.

Like many other hummingbirds, they are important in our ecosystem because they assist in pollination. They have a long extendable tongue which allows them to easily feed on flowers and can be seen during the day hovering above flowers or perching.

While eating, they tend to lick flower nectar rather than suck it. They can lick nectar at a speed of 15 times per second! Only about 20 days after the new chicks hatch, they can take their first flight. Just one year after hatching from their eggs, they can mate.

Coloration and Markings: Males have an iridescent red throat and a bright orange belly and back. Their wings are short and don’t reach the end of their tail when they are sitting. Females are a greenish color towards the top of their body and below their throat, they have rusty-colored oranged markings down their bodies. Their green tail also has rusty-colored patches.

Habitat: They can be found in areas with green plants and while breeding, you can find them in orchards, forests, gardens, parks, and meadows. In the winter months, they migrate to Mexico and woodland regions and mountainous areas in southern California.

Diet: Like many other hummingbirds, they feed on tiny insects and nectar from flowers. They feed on sugar-water mixtures from feeders and often like scarlet sage, red columbines, paintbrush, and many other flowers

Instead of traveling in a straight pathway, these birds travel in a loop pattern when migrating. Their breeding season is between April and July and they eat about half of their body weight every day because of their high metabolism.

During the migrating season, they eat even more because of the amount of energy they will need to make this trip. They are known as one of the most aggressive species of hummingbirds in North America despite being one of the smallest hummingbird species. They are fierce enough to attack other birds that are much bigger than them.

Out of all the other North American hummingbirds, they have the longest route while migrating. As long as they have good shelter and food, they can survive in freezing temperatures. When it comes to locations, their memory is outstanding. They are able to remember flowers they fed on a day or even a year prior before migrating.