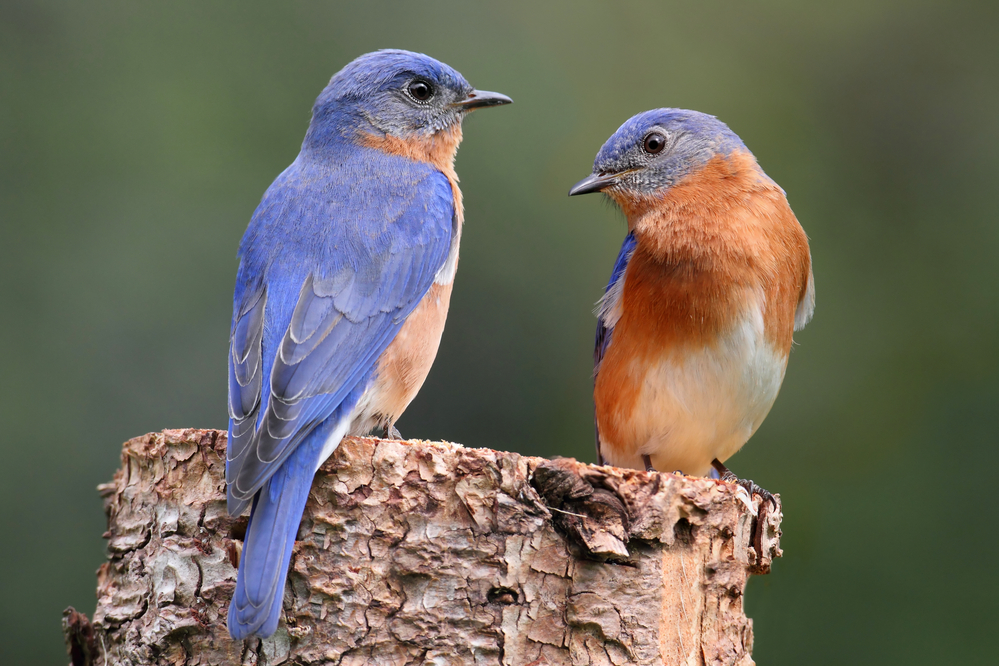 No matter where you go in North America, there all sorts of blue birds: the gorgeous Indigo Bunting, the chattering Blue Jay and Florida Scrub Jay, the branch hopping Cerulean Warbler…even the iridescent Tree Swallow…lots of blue birds…but we’re not going to discuss these splendid azure birds…we’re going to acknowledge the beauty, appeal and charm of the three species of Bluebirds…that’s one word, of the United States. That’s right, there are only three species of Bluebirds. Well, the Bluebird isn’t a species all by itself, it’s actually a member of the Thrush family, and there are eight members in that family.

Before we start looking into the life and times of the three popular Bluebird species, let’s find out a little more about what makes them,…well, …”chirp!”

Bluebirds are for the most part, monogamous through the mating period and sometimes breed together for more than one season. They may raise two to three broods a season.

Like it’s stated above, the Bluebird is really popular…popular with bird watchers because of its beauty and song,…popular with gardeners because it’s a voracious insect appetite, popular in Pop Culture through songs ,poems and folklore.

Birdwatchers really do love experiencing the Bluebird in the wild. These colorful songbirds are breathtaking. When you spot one, it’s a treat for the eye. Their plumage takes on an iridescence as the bird flies and perches. Then it starts singing in a lower keyed warble in one to three notes, it’s a delightful call.

Gardeners are always happy to see a Bluebird perched nearby. Bluebirds are an all-natural pest control service for gardeners as well as farmers. They love to eat caterpillars, beetles, crickets, grasshoppers and more.

In pop culture, the Bluebird takes center stage in lots of modern songs like 1934 song The Bluebird of Happiness, The Bluebird Song from Winnie the Pooh, Voices In the Sky by The Moody Blues portrays the bluebird as a muse in the song, and Miranda Lambert’s Bluebird, plus numerous poems and stories. Everybody loves Bluebirds.

3 Types of Bluebirds Found in the US

In this guide we will be covering the following 3 bluebird species along with teaching you how to identify them in the wild and where you can find them:

The Eastern male Bluebird has a deep, lovely blue back and side with a rusty or brick-red color on the throat and breast. The females are more muted and a little duller. Males often look plain gray-brown from a distance. Females seem a little grayish above with bluish wings and tail. Both have a big, rounded head, plump body, big eyes and long wings, with a short tail and legs.

You find them in your own backyard, near meadows, fields, parks, golf courses, even cemeteries. When it comes to nesting, the Eastern Bluebird has suffered through some serious challenges over the years. Considered cavity nesters, they only nest inside a fully enclosed cavity, except for the entrance hole. Here is their challenge: these birds are unable to make their own nest cavity! About a hundred years ago, the Eastern Bluebird population started to decline because they couldn’t find adequate nesting sites. They depended on trees with holes created by woodpeckers from past seasons. Trees like these eventually rot, people tend to cut those old trees down. Old fence posts were another favorite nesting site. Woodpeckers would create the holes, however, over time the old posts were replaced, sometimes with steel posts, so habitat was lost. Now, that should have been enough for the poor Eastern Bluebird but no,…there was more. House Sparrows and European Starlings were introduced to the region. These birds used the same nesting areas and sites as the Eastern Bluebird and competed for the cavities by forcing them away,…even killing them. Thankfully, many organizations promoted bluebird conservation strategies that helped bring public awareness to the nesting cavity issue. The population starting to increase because people put up birdhouses created especially for the Eastern Bluebird and started feeding them year round..

They feed on a wide variety of insects they catch on the ground during the summer months. It’s normal to see them perched on tree branches and telephone lines, then gracefully drop down on unsuspecting worms, spiders, crickets, beetles and more. In the winter months, the Eastern Bluebird feeds on fruit and berries left on trees. They have amazing eyesight. They can see insects in the tall grass from over 50 yards away.

So, where do you see these beautiful birds? They exist east of the Rockies and range from Manitoba, Canada to Mexico and Honduras. They are at home in just about half of the country.

They have a lovely and distinctive song, it sounds a lot like “chur-leee, chur-leee.” Fun Fact: The Eastern Bluebird is the state bird for both New York and Missouri.

You can find these blue-beauties west of the Rocky Mountains from southern Canada into Mexico. Even though the Eastern Bluebird is not native in these parts, the Mountain Bluebird is!…but most often at elevations above 7,000 feet. Unlike its Eastern cousin, The Western Bluebird are often found in meadows and fields, but they really like to stay in wooded areas. In fact, they gravitate towards forest areas that have been logged or burned due to the many places that are open and still have trees available. Their mating call sounds like “cheer, chur-chur and chup.” Other times it sounds like “keew.”

Another difference between the Western and Eastern Bluebirds is that the Western birds like to stay closer to the ground. So, they can swoop down fast and snatch up insects. They like to perch on low limbs, fences and fence posts, signs and the like. They even stay close to the ground when they fly.

If you see a Mountain Bluebird, you know you’ve seen something truly special! You won’t mistake it for any other bird in the mountains. The males are covered with beautiful sky-blue feathers on their head, back, and wings. Females are a little more difficult to identify because they are mostly gray-brown, with smidges of blue on their tail and wings.

They sometimes have an overlay of orange-brown on the chest. Mountain Bluebirds’ bills are black.

Well, they are MOUNTAIN Bluebirds and that exactly where you find them. They exist in elevations up to 12, 500 feet during the breeding season. They tend to retreat to elevations around 7,000 feet after winter blows in.

They breed across the West of the United States all the way up to Alaska and spend winters in Central Mexico. You can also find them from the mountainous coast in the U.S. sometimes into Kansas and Oklahoma.

Nesting for the Mountain Bluebird is important…REALLY important. A suitable nesting site is so important to the female, nothing else matters to her. She totally ignores the things other birds look for in a mate like the color of the plumage, flying ability their mating call and such.

In fact, she chooses her mate based on the location and quality nesting cavity that he can find for her. That can be a tough job for the male because the Mountain Bluebird competes with other bigger birds looking for the same nesting sites. House Wrens, European Starlings, House Sparrows and Tree Swallows all search for the exact same nesting cavities. They prefer their habitat be a mix of grasses, shrubs, and trees, like open wooded areas and forests that may have been burned or places that have had the forests thinned by logging.

Mountain Bluebirds have a voracious appetite for insects during warm months and switch their diet to mostly berries in winter. Unlike the Eastern and Western bluebirds that swoop down into the grass for their prey, the Mountain Bluebirds are efficient aerial hunters and with skill and grace, snatch bugs out of midair! They can hover as well so pouncing on prey from their perch is something they’re adept at too!

The male Mountain Bluebird feeds his mate continuously while she is incubating and brooding. When the male approaches with food, the female may beg with open beak, begging calls and shivering wings. Most of the time, she will wait ’til the male perches, then she silently call him by flicking her wing.